The spectacular exhibition COSMOS DISCOVERY was created in cooperation with NASA and the Cosmosphere Museum. More than 200 original exhibits map the crucial steps and evolution of the journey into space.

At the Cosmos Discovery exhibition, visitors can enter the MIR orbit station, where they experience an artificially induced weightlessness. They will take a look inside the Columbia cockpit and the Russian Soyuz spacecraft, which still carries cosmonauts to the ISS orbital station. There is also the Apollo mission, including Lunar rover and Apollo captain modul. The first steps of space travel and the faith in animal heroes such as Lika and Enos are very moving.

The exhibition presents a clear and comprehensible picture of the evolution of space missions in the USA as well as in the Soviet Union and focuses on the colonization of Mars and the Moon which is in preparation.

On more than 2,000 square meters, visitors will see real exhibits that have returned from space, many photos and detailed descriptions are present to please both fans and experts. Visitors can go through the shuttle cockpit, peek into the spaceship return cabins, explore the Houston control center, see a real orbiter and more. The exhibition is complemented by original spacesuits, helmets, gloves, but also underwear, watches, cameras and even space food. Thanks to this, the visitor knows how demanding the conditions for men in space are.

The exhibition also presents quite unique exhibits that, thanks to secret technologies, could not be revealed for a long time. One such exhibit is the original US Saturn V rocket nozzle that transported Apollo to the Moon. The nozzle had to withstand temperatures higher than the melting point of iron. Right next to it is a huge model of the Saturn V rocket, which in reality is taller than 100m. For the fans a part of the original control center in Houston is really interesting, as well as two of the original control counters, used to control the flights in Gemini and Apollo programmes. The original stickers and originals and copies of a variety of flight controllers “cheat sheets” have remained on the shelves.

Special attention is also paid to the prepared missions to Mars and the Moon. The exhibition includes information, videos and models of rockets of all the space agencies and private companies which are getting closer to achieving this goal.

“We want to take visitors into space to show them not only the technical details, but to invite them into the atmosphere aboard spacecrafts and shuttles, so that the exhibition attracts not only fans and experts, but also families with children,” says JVS Group’s representative.

Every visitor receives an audio guide at the entrance of the exhibition, which will provide much more information and interesting facts about the exhibits. The audio guide is also available for children to guide them through the exhibition in a playful and fun way. 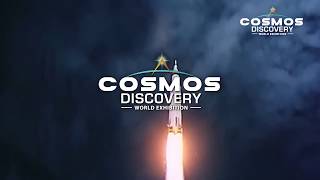